Task force:  (Left to right) Dana Carney of Organizing Indy, Chris Frazier of Focus Forward, and Nicole Bickett or Organize to Optimizer were recruited by INtake to help some local residents with their organizational woes 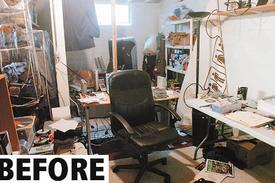 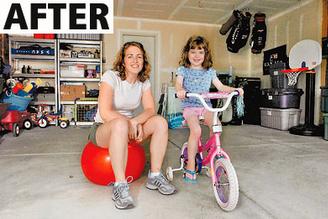 The Gift family has lived in their home for two years.  They had accumulated so much clutter in their garage that they could only fit one of their vehicles in it, but after categorizing and shelving things cleared up. 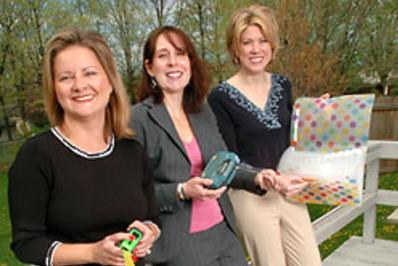 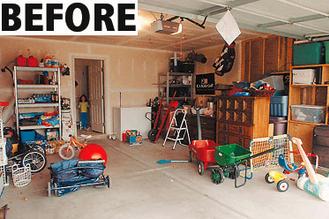 When it comes down to it, most Americans have too much stuff and too few hours in the day, which results in one thing.  Clutter.

According to Frazier, today's generation is in a position opposite of generations past, when the Depression forced families to hang on to everything they owned.

"Now we have an entire generation of people who inherited that philosophy but need the opposite set of coping skills because we have so much more stuff." she said.

Angelo Surmelis, a designer on TLC's "Clean Sweep,"  said he believes that being overwhelmed is the overriding factor for why more homes aren't organized.

"They're not lazy people; they're very hard-working people."  he said of families featured on the television show.

"I think they get overwhelmed with life and what happens is, they just pile things up, thinking they're going to get to them later, and they never do.  The piles just get bigger and bigger."

But you don't have to let your heaps of clutter swallow you alive.

Getting organized is simpler than you think.

We've consulted with some of the top professional organizers in the city for tips on cutting through your stacks of paper, drawers, of junk and garage gar-bage.

And we'll show you how with help from authorities on arranging, three young professionals learned to restore order to their homes.

For many people, clutter begins with one simple item: paper.

"It is the number one culprit."  Surmelis said.

"One of the easiest ways to avoid it is to stop it at the front door."

So he employs the "10-second rule," which gives clients 10 seconds from the minute a piece of paper comes into their space to make a decision whether to toss it or keep it.

If they keep it, it instantly goes into a folder, is labeled as specifically as possible (for recipes, make a 'cake,' 'cookie' or 'pie' folder, not a 'dessert' folder) and housed inside a binder.

Nicole Bickett, 36, of Organize to Optimize, specializes in helping tame the paper problem in her clients' offices and home offices.

"I think there's more information now than we've ever had before, and we don't know what to do with it."  she said.

​But her filing system differs from Surmelis'.  Bickett helps clients stop the paper trail before it ever leaves their printer by getting them to use "The Paper Tiger," a software program she sells.

Using keywords input into a database, "The Paper Tiger" allows users to search for files.

So, for example, to look up a file containing information on your Volkswagen Jetta, instead of searching for the document by its specific name (i.e. Jetta), the software lets you recall it using as many keywords as you want, such as "Volkswagen," "car" or "auto."

Whether you choose electronic organization or the old-school folder/binder method, anything that forces you to make a decision is helpful, according to Bickett.

"If you have a system in place that will prompt you to go back to it, then you won't have clutter anymore." she said.

​All a clutter: Greg Berman, 25, works out of this basement office in the home he shares with two roomates.  Berman agreed to allow Nicole Bickett of Organize to Optimize to reorganize the office space.

Ever heard someone say that the only thing they ever made in the kitchen was a mess?

It sounds funny, but it's often true.  "A lot of times, because the kitchen is the hub of the house, it can be very disorganized."  Dana Carney of Organizing Indy said.

Matt Reiswerk, 25, of Indianapolis, doesn't have kids.  But his kitchen was anything but organized.

When he consulted with Frazier, she determined that Reiswerg had a few organizational dilemmas.

"Mostly he had not assigned a specific home to some items and had not maintained organization by routinely putting things away."  she said.

Frazier's first steps were to empty the kitchen cabinets, sort items by category and put like items together.

Then she tackled the problem of limited surface space.

"The microwave was taking up the entire breakfast table, leaving nowhere to sit in the kitchen and leaving limited space for food prep."

​Her solution:  repurposing an unused TV stand into a place for the microwave and toaster.

She then assigned homes for each type of item, such as placing Reiswerg's cereal on a particular shelf and putting his napkins in a certain drawer, and she implemented space-saving containers, such as a spice rack and a fridge can rack.

When you can fit only one car into your two-car garage, it's time to get organized.

Such was the case for Teresa and Mike Gift, both 31, of Westfield.

The parents of two young children, the Gifts' garage was overflowing with bikes, baby strollers, golf clubs, holiday items and other miscellaneous items.

"One question I commonly ask is, 'what are all these items inside the garage worth compared to the value of the cars that are being parked outside?' " said Carney, who served as the professional organizer on this task.

She began by moving all the items from the garage to the driveway and sorting them.

Fortunately, the Gifts owned shelving units and storage bins, so nothing had to be purchased for the project.

After devising her organizational plan, Carney grouped the items into categories (such as "sports equipment,"  "lawn tools,"  "automotive") placing some items into plastic storage bins and labeling them.

She also moved some shelving units together, placing larger items along the walls and hanging other items, such as Mike Gift's five golf bags (he's a former golf pro), on hooks to free up floor space.

"The Gifts then made decisions on what items they wanted to keep and donated other items to a local organization,"  Carney said. 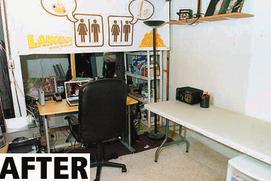 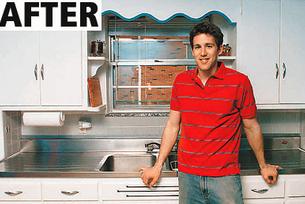 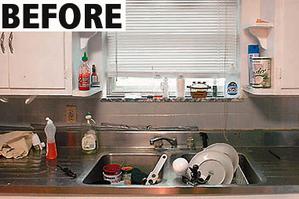 Berman, a medical student, is in the process of earning his MBA.  He's also the founder of Rock for Riley, and annual concert event benefiting Riley Hospital for Children.

To get his workspace in order, Bickett began by cleaning off his desk are and helping him to decide where each item would go.

"What he didn't have was anyplace to put things once he made decisions."  Bickett said.

She also noticed there was unused space under Berman's desk.  So she added a three-drawer storage crate for excess materials like , Post-it notes, pens, highlighters, electrical cords and batteries, labeling the drawers as they went along.

Bicket also set up two file boxes for incoming mail, labeling them "inbox/mail" and "to file." as well as a mesh CD holder to contain Berman's collection of discs.